Leiborschy Ezra. Ezra starts his new life with Kyla the Wire in Middlesex. He is the result of a few false starts and a very patient wait by his family, who assure us that they are prepared for a Lajka son ! As well as being Kyla's constant companion Ezra will set paw in the show ring at the end of the year. His mother's son ..............we look forward to watching his progress .Ezra qualified for Crufts 2009 aged 6 months to the day by winning Junior Dog. Not content with that he came 2nd in Post Graduate Dog and took Best NSC Puppy.Ezra qualified for Crufts 2010 at Crufts 2009 and was awarded his Bronze Good Citizen at 9 months.

Leiborschy Randall. Randall.......... stood out in the crowd as a very special puppy for a very patient, little girl. Niamh ordered a Mallard ........ and she got one with Randall's gentle , sensitive and intuitive nature. We are so glad Randall lives close by in Nottinghamshire and we will see him regularly and watch his and Niamh's relationship grow. Niamh and Randall achieved the Kennel Club GOLD Good Citizen Award in June. 2009.

Leiborschy Hugo Oszkar. Hugo has started a new life in Bedfordshire with Lulu the Weimie. Everything you would want in a Wire is embodied in Hugo and we am sure his owners will realise very quickly what a special breed this is.

Leiborschy Saffron Szerez. Saffron has gone North to Cumbria to a very experienced owner after a long and patient wait. She will keep Delta the Lab company and tease the cat. With her mothers personality she will keep her owners on their toes as she tries to outwit them. Saffron will be seen in the ring from the end of the year and we are sure that her over brimming confidence will equip her well. Saffy began her show career at LKA in December 2008 aged 6 months to the day. Saffy is hip scored.

Leiborschy Ekko. Ekko..............and what a little gem he is. Ekko starts a wonderful life with a very patient and wise GSP Spitz, in Warwickshire. Ekko will undertake Gundog training and will show his owners what fun the show ring can be. The question is who will handle in the show ring?. Well Joan handles in the ring and Ekko debuted at LKA December 2008 aged 6 months to the day. Ekko had his first Puppy Group placing in March 2009 and his first adult Group placing in June2009. Ekko competed in his first Working Test in September 2009 and he has qualified for Crufts 2012 , being awarded Reserve Best Dog CC at the inaugural HWVA Champ Show, he is now Crufts qualified for life and has a KC Stud Book number. Ekko is hip scored and HUU tested.

"Dowell's L Ekko, pleasing head, eye & expression, in better balance & with less weight than his brother in the previous class, moved soundly & collectedly. Of pleasing colour, coat & type, should just be moving into his best form & could yet do very well. BOB"

"Leiborschy Ekko, 30 months, lovely type and quality, nice head piece with a kindly eye and gentle expression, very pleasing in neck, forehand construction and ribbing, well coupled, pleasing outline and proportion although could perhaps be just a fraction longer in body. Good colour and coat texture, would have preferred to see a little more power and drive from his rear quarters"

"Dowell`s Leiborschy Ekko, strong & masculine, I felt he had the most typical outline & balance in this class, super head with a square appearance due to his good furnishings, good layback of shoulder & length of upper arm, but I felt he shows rather too much angulation behind to be described as `moderate`. He moved with power & purpose on a long stride. Close run thing for BOB, I liked him very much but felt the open class winner had better overall balance"

"nice example of the breed, not too big but has bone and depth, good shoulder, held topline well, soft expression with a kind eye, coat and colour OK, stands well over ground on tight feet, moved on an even stride around the ring.'

"In excellent coat for his age and in good body condition, head handles well and has nice expression, sound mover RBD"

"a real character in the ring but full of type, had won a good NSC Puppy class, nice wiry coat, good body with good depth of rib ."

Best Puppy and Best of Breed

"only a baby at 6 months, good outline when standing, best of heads, , good neck and shoulder, level topline, clean tail run off, deep enough chest, went well on the move. Sorry he was not around for BP"

Leiborschy Marci. Marci finally arrives in Norfolk after a very long and patient wait. What a bright as a button puppy with her mothers fizz ! Sam............you wanted a puppy with Lajka's attitude.........you got one! In the capable hands we know that training will be fun and rewarding whilst Holli the Labrador watches on. Marci passed her Bronze Kennel Club Good Citizens Scheme award at the age of 24 weeks and her Silver at 6 months and one day and her Gold at 12 months. Marci began her show career aged 6 months to the day at LKA, December 2008. Marci competed in her first Working Test in September 2009, qualified for Crufts 2011 and enjoys agility. She beats during the working season in Norfolk.  Marci is hip scored and HUU tested.

"Tidy girl, moved out well, liked everything. Just lacked a bit of maturity"

"small and a bit light in bone, still within the Standard but would prefer her more robust, needs to strengthen all through, shows well" 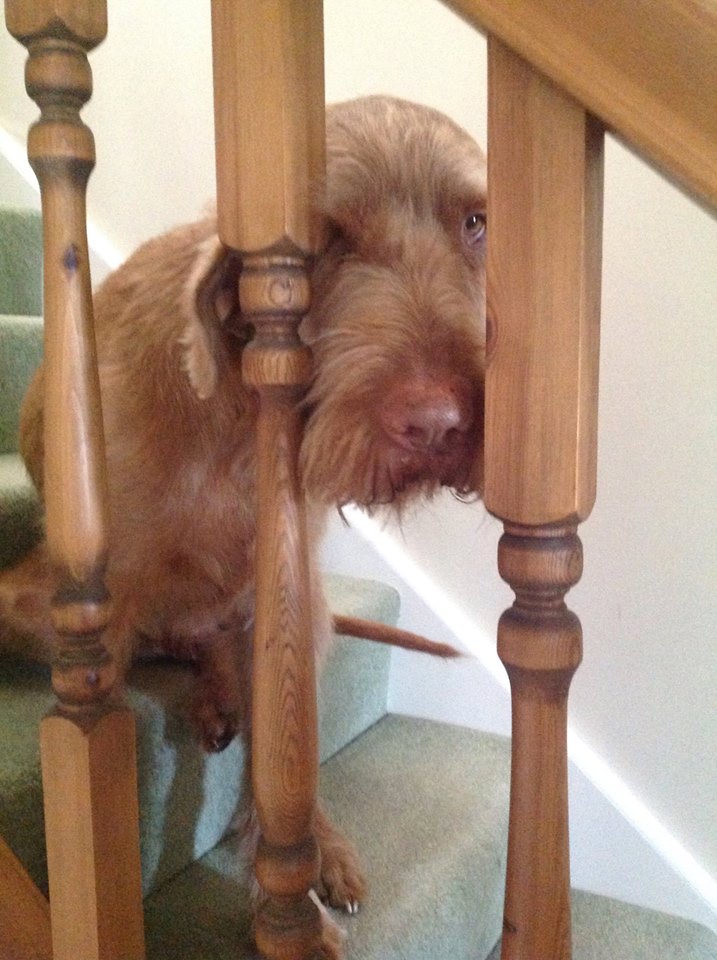 Leiborschy Manney. Manney lives in Cambs with two delightful and caring little girls and an adoring Mum and Dad. The "Poppet Puppy" of the litter he is soooo like his Dad. Chosen after much deliberation and waiting we know Manney is perfect puppy for them. Even Chester the cat agrees.

Leiborschy Okos Heja-tars. Mr Serious chose to wait until right to the end to show us the real Oko .When he did he was the perfect choice for Miriam and destined to live in Devon. He will spend his life around birds of prey watching and working with them. He will have an adoring public, total commitment from his owner and live in Wire Utopia.