Leiborschy Ruari. After a very long, patient Ruari begins life in Peterborough with Rufus the HWV, equine company, cats and Jane and Spence experienced Wire owners. Always the most balanced of puppies in every way I hope Ruari will extend his owners knowledge and experience as they try their hand at new activities. I hope to see a lot of this gent and will watch with great interest as he matures. Ruari is hip scored and HUU tested.

"Nice class with not much to choose between all three. 1st Spencer's Leiborschy Ruari, lovely outline and of good type more mature than the other two in the class. Head not perhaps of my choice being longer in muzzle but well furnished. Clean neck into good shoulders and angulation to front, ribbed well back with strong rear and moving with ease, coat of russet with wire texture."

"Spencer's Leiborschy Ruari, preferred the overall balance and size of 1 and moved better. Pleasing, masculine head which I also preferred to 2, nice expression, well muscled to rear with good angulation, strode out when moving."

"Spencer’s Leiborschy Ruari, litter brother to 1 same remarks as 1 too. Smart young dog a credit to their breeder. Sure they will change places on another day."

"Spencer’s Leiborschy Ruari, built on finer lines than 1. Pleasing head, good neck & correct lay of shoulder. Not in as good coat as 1. On the move he was sound striding out well"

"Spencer's L Rauri, nice type head spoilt by his expression. Head carried well on good neck of length, nice firm topline to tail a little too low set, lacking a little depth of chest & in body but well ribbed, in lovely coat of good texture & length. Not the return of stifle. Straight forelegs & good feet. Moved out well but not the ground coverage of 1."

"Leiborshy Ruari, litter brother, lighter built but not as forward but I loved his type & balance. Not the rib or chest of I yet but on the move made a lovely picture. Should finish well & reverse the placings. Just a matter of judging on the day"

Leiborschy Syrus. Syrus leaves me to start life in the South West with his uncle Ylai, Finn, Jack, Lily and Mum and Dad. This handsome chap was destined for the ring from a very early age ( IF he ever grows into his ears) and if he is about you'll hear him! Syrus kicked off his Championship Show career at the inaugural HWVA Champ Show by being awarded Best Puppy Dog and qualifying for Crufts 2012. At the age of 8 months Syrus was awarded Reserve Best Dog and Best Puppy in Breed at WELKS followed a week later by the Reserve Best Dog Challenge Certificate and Best Puppy in Breed at The National. and three weeks later Best Dog and Best Puppy in Breed at Bath Ch Show. Syrus now has a KC Stud Book entry and is Crufts qualified for life. Syrus is hip scored and HUU tested.

"Stockwell's Leiborschy Syrus. Good balanced outline, little longer in loin than first, he seemed to have a serious outlook on life, strong neck, very well made fore and rear quarters, excellent deep chest, good spring, not so well ribbed back as first, topline and tailset correct, well turned stifle, good legs, feet on first a little tighter. He was a very good mover"

"Stockwell’s Leiborschy Syrus, well built and up to size with strong wire head, prominent breast bone and deep chest, good moderate angulation, showed his quality on the move, steady and with purpose. BOB"

"Stockwell's Leiborschy Syrus. Super typy youngster, well balanced, good bone and rear angulation, but not overdone. Good outer and undercoat, moved with drive and pushed hard for BOB. Another one with a good future ahead which I shall watch with interest."

" Stockwell's Leiborschy Syrus, 10 months male of good proportions and nicely balanced, very good bone and muscle for age, moved out with drive and purpose, super puppy and one to watch."

"Three litter brothers with little to choose between them"

"Leiborschy Syrus, 8½ months, full sized but very well built and had a pull in ribs and body, good head proportions, very good coat. Eyes need to darken but still time for that. "

"Stockwell’s Leiborschy Syrus: W/h vizsla, very much the baby of the group, but still showing great promise, superb head with such kind eyes. Although still immature, his quality shone through & good movement showed off his balanced outline"

Leiborschy Doric. George starts life in Preston with Lucy, Iain and Karen with Monty the Wire as a house mate. A super, good looking puppy with a fizzy personality we are sure he will compliment Monty perfectly and be a whizz to train.

Leiborschy Hajna of Elyscea. Hajna starts life in Tring with her Mum Yeva and Lily the GR. She captured the heart of her owner from a very young age with her striking good looks and will join some of her siblings in the show ring , we will watch her progress with great interest. Hajna is hip scored and HUU tested. 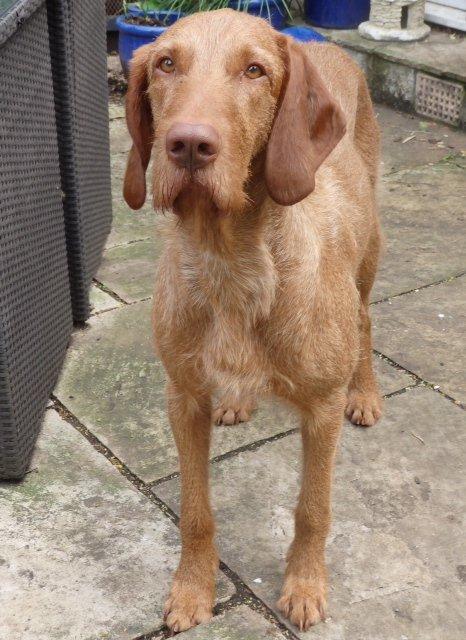 Leiborschy Vegul. Jorge begins life very close to us with Blossom the Shar Pei, Paula and family. The long waited for puppy is now a reality and what a reality he is. Jorge will enjoy training and ringcraft with his sister, our Griet and we hope Paula will enjoy her new hobby of dog showing. Jorge qualified for Crufts 2012 at his first Championship Show, is qualified for Crufts 2013 and has achieved Puppy Group placings at Open show level. Jorge is hip scored and HUU tested. In October 2013 Jorge was joined by his nephew, Leiborschy Kolyok ( Bertie).

"good sized puppy dog , a well textured coat of correct colour, very well off for bone and substance , yet not yet presenting the most balanced of pictures - time will tell"

"Three litter brothers with little to choose between them"

Harmer's L Vegul, very similar to 1. Not quite as tight in elbow but not loose. Good depth, forechest and good topline. With maturity should develop more across second thigh" 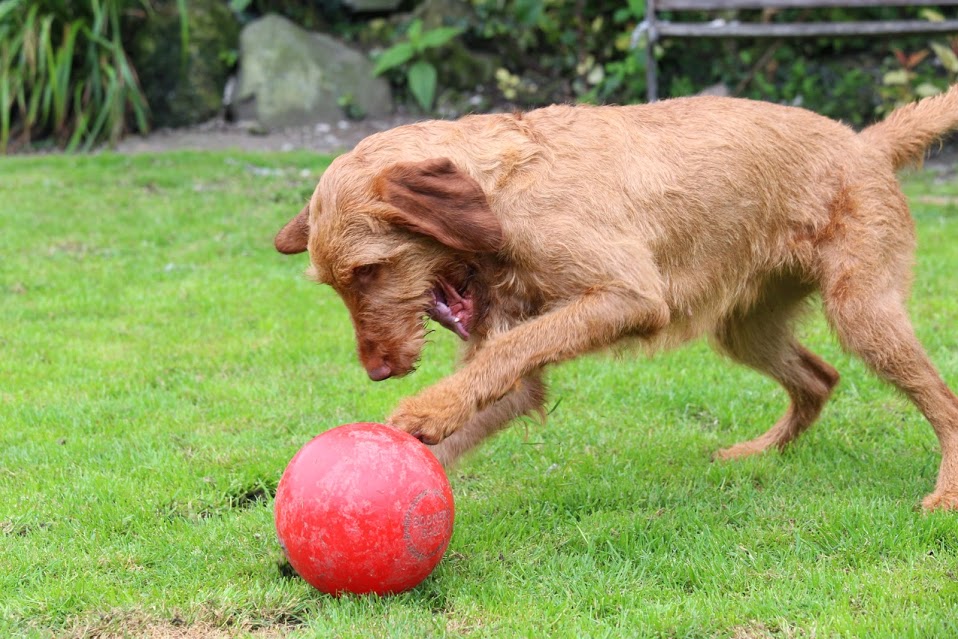 Leiborschy Elka. This gorgeous feminine puppy Elka starts life in Essex with experienced Weimaraner owners. A beautiful name for a beautiful girl ....everything was just meant to be for this puppy.

Leiborschy Patrik. Paddy starts life in Lancashire with Martin, Kathryn and James. Always the big, bumbling, boy puppy we hope Paddy will bring back the joy of dog ownership to his family and we welcome them into Wire World. Martin has never been so popular!

Leiborschy Suly. Bob lives very close to his mum and litter sister, Yeva and Hajna in Bucks. Bob will perfectly complete his family and is already reminds them what a joy canine companionship brings.. With two children in his family Bob will never be short of playmates. Bob pictured here on a recent visit to see his Mum and sister Hajna. 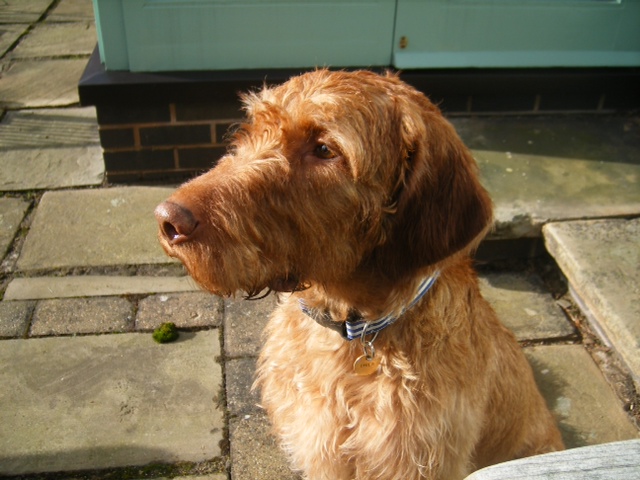 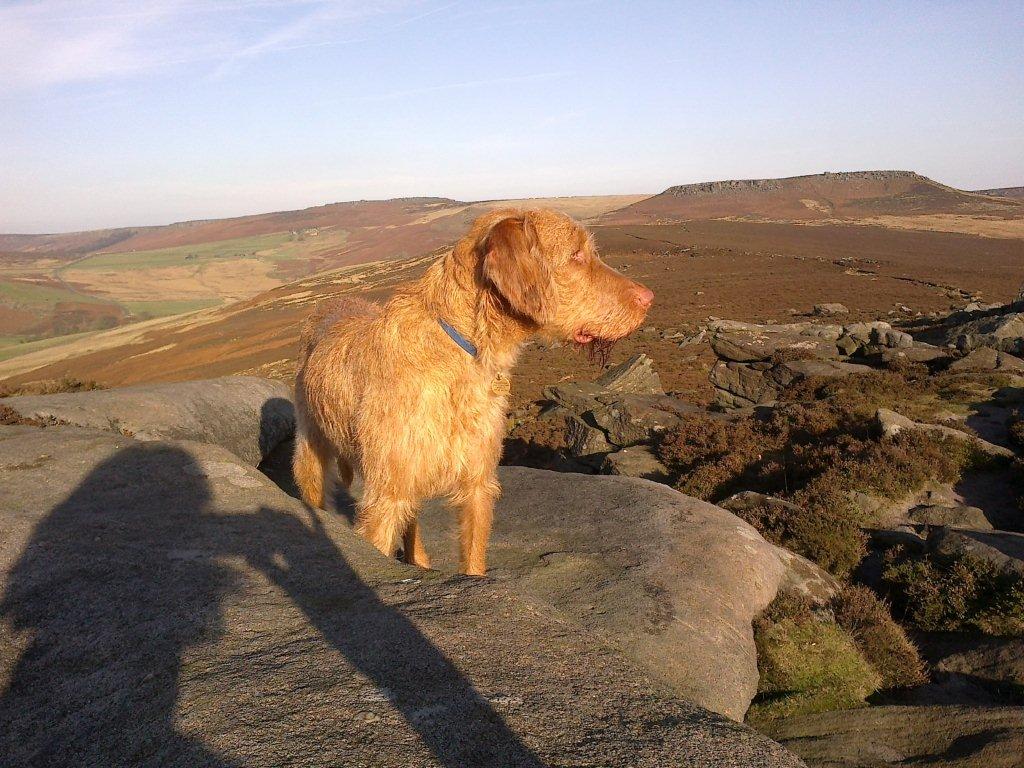 Leiborschy Chile. After a huge amount of research and planning Chile lands in Sheffield and hits the ground running. He cannot fail to have a perfect life with such a committed family around him. What a super introduction into dog ownership he will be with his balanced and mature personality. We hope to see Chile regularly as we meet up for walks.

Leiborschy Neo. Neo marks a new beginning for Keeley and Gary as he starts life in Sheffield. Experienced dog owners, Gary and Keeley have a super young man as their introduction to Wires ( they already want another!!). We hope to see lots of this chap as we meet up for walks.