After lunch today Mallard, King of Dogs told me it was time for him to go to his final throne. David, the vet and I agreed with Mallard that despite my best efforts over the last two weeks we had to let this wonderful dog go . I had a very precious 20 minutes with Mallard whilst David got everything got ready. I told Mallard everything I wanted to tell him, how he is the most fantastic dog, I hugged him tight and told him that he was loved by so many people. He is my dog and only my dog and we shared that special time, calmly and undisturbed. He seems to have been with me forever and I hoped he'd live forever,. He cheated death at 6 and 13 weeks with intussusception, He barked in the face of tumours on his nose last year but could not beat failing kidneys. All I ever want for my dogs at the end is dignity, peace , no pain and a vet and owner who agree sadly, that it's time to go. Mallard got that this afternoon, he left this earth as he should have done, regally and with an owner who worships him but knew her ultimate responsibility.

Mallard aka Captain Popular knew he was destined to stay with us, even though we hadn't realised it! An unusual start in life has led him to become very special to us and many other people . We have never had such an accommodating puppy with such a grown up attitude to life and an impeccable temperament. Mallard was HWVA Top Puppy Dog and Runner Up Top Puppy 2006 .He was Best Dog Crufts 2008 and has qualified for Crufts 2011, 12, 13. 14,15, 16 and 2017. Mallard has sired 3 litters for us at Leiborschy to Leiborschy Yendah ( July 2007) and Lajka ( June 2008) and Leiborschy Griet ( 2013). He has sired four other litters and his is progeny are being awarded top awards in the show ring which include HWVA Top Puppy 20008/09 , are being worked professionally and achieving awards in the competitive working field. Mallard is HUU tested and hip scored. 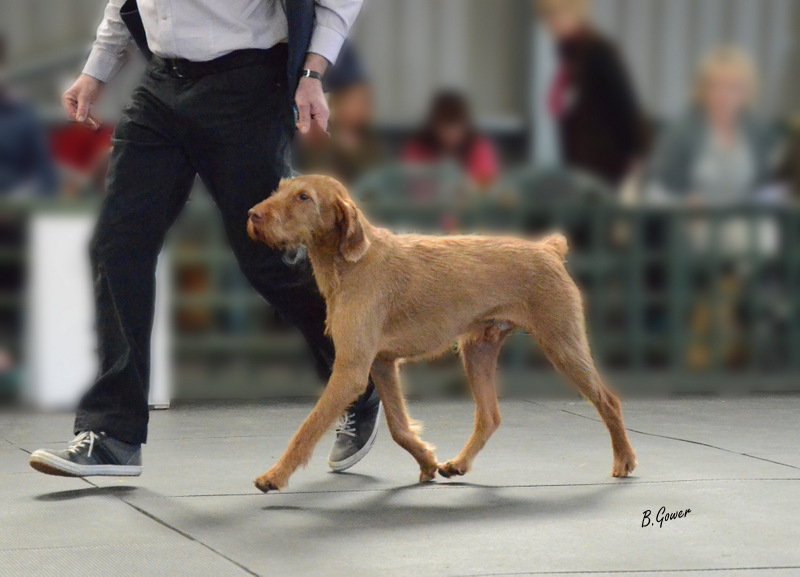 "Two grand old chaps here of 10 and 9 respectively. Both are very well made with great forechests and depth. 1. Parry & Newman’s LeiborschyWilfek. Balanced in head and with a very kind eye he has a good wire coat and stands on neat feet. His frame is better covered and he has a more positive front movement than 2. "

"Parry’s Leiborschy Wilfek, he has a super head with lovely eye & expression. Medium length neck. Angulation is balanced. He is just a little extravagant in front action. Well ribbed back. In super coat."

"1st Parry’s Leiborschy Wilfek. 8 year old in super fit for function condition, certainly did not look his, age. Docked tail so must be worked as he had that distinguished obedient, intelligent expression with very handsome head, all with good coat and furnishings."

"Leiborschy Wilfek, RBB, 5 years old, masculine in appearance and outlook, pleasing head, eye and expression, well textured coat of good colour, pleasing rib cage, strong and firm top line, nicely coupled, not quite the style of the winner on the move but close up. "

Litter bro to 1, many of the same attributes. For me a better size, good height/length. Lovely head and eye, good front, shoulder and forechest. Shorter coupled with a topline good on the move. Coat and firnishings of good depth and quality. The stride is there on the move but he needs to settle down at the front."

"Good sized young dog, true wire coat, as had all my exhibits. Moved well with confidence and some maturity. Would have preferred a little more balance but this may come in time."

"Charming dog of deep Russet colouring with a lovely head, excellent layback of shoulder, topline, tailset and carriage with good, strong bone. Super mover in profile; an ultra happy showman, who made me want to smile with his serious expression and insistence on flinging his feet out. Can still tighten a touch on elbow and deepen through the heart but this should come with maturity as he is still very much a baby at just 9 months. Just right for his age. A most exciting prospect"

Res Best of Breed and Best Puppy in Breed

"upstanding dog with strong timbers and well padded feet, excellent coat, covering his skin, in great condition and well muscled. Needs to drop in brisket, shade too short in body for length of leg. Happy dog but needs to settle in movement, cant afford to be any taller"

"preferred this litter brother for size, good hind angulation. Erratic front movement, though sure when he eventually gets to grips with this he will have a promising future. Lots to like for all round conformation and general shape"

"7 month old dog with a good way to go. Developing nicely in coat texture, bone and muscle. Good shape skull and biddable expression, lovely dentition. So keen to please and easy with his balanced action. One to watch for the future"