Leiborschy Eppie. What a journey gorgeous little Eppie made to her home in Belfast. Would a mammoth car and ferry journey phase Eppie? Of course not! The sweetest, most girly puppy, Eppie will, and is melting everyone hearts with those doe eyes! We are sure she will be the talk of the town as she gets out and about with her wonderful caring owners.

Leiborschy Keero. Ike the Tyke starts life in Northants. A puppy with oodles of attitude, he will keep his owners on their toes. A very handsome chap, Ike will introduce his new mum and Dad to the joys of the breed and we hope will meet up with his two brothers who are not too far away. Ike is hip scored.

Leiborschy Yuli. Two quite excited adults and two very excited children take Stig to his new home in Gloucestershire. What a lovely puppy to introduce them to the breed , win them over and impress Dad! Stig began Beating and Picking Up during the 09/10 season and was super impressive on the 2010 Field Training Day. 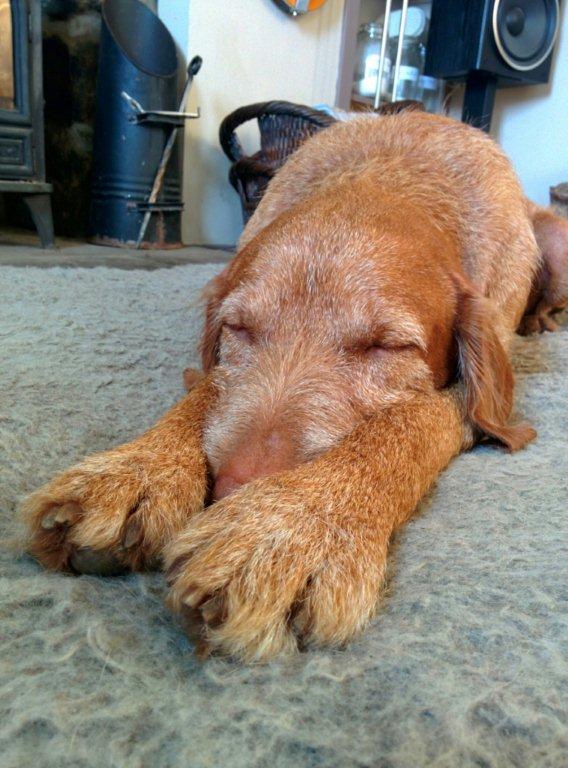 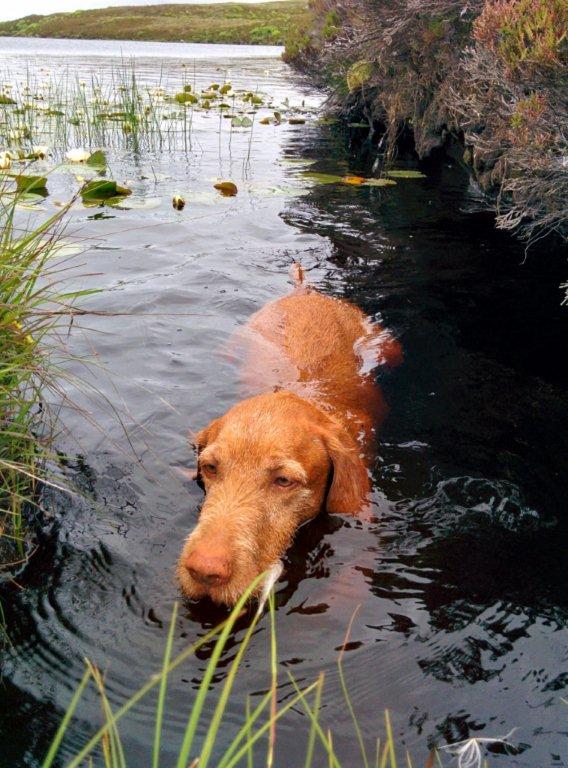 Leiborschy Buli. Hector had to outdo Eppie in the miles and travel to North Uist on the Western Isles to start his new life, a total journey of 37 hours. Such a long wait for his owners and such a long journey for Hector have resulted in a perfect match. What an exciting outdoor life awaits Hector as the only wire on the Island..................although not for too long, as his owners have declared their allegiance to the breed after a long period without a dog.

Leiborschy Arek. Arek has left us for his new life in West Sussex with Kate the cat , Ollie and Charlie. We are sure fate played a hand in Arek and his new family getting together and that it was meant to be. Training for the Field lay ahead for him and his new "Dad" as they learn together. Aged 6 months, Arek had already made his first retrieve on Rabbit. Arek competed at his first Working Test at 7 months. In January 20010 Kev realised a long held dream ......"I have for so long wanted a dog, a gun, and to be able to shoot something that _my_ dog went and collected for me, and for me to be able to take that bird home and consume"

Leiborschy Aoife. Angelika starts life in Nottingham with a very experienced Weimararner family and Megan the Weimie. We are sure that Angelika will win her new family over to the breed with her easy going manner and super personality. Angelika will get together with her brother Izsak who lives locally.

Leiborschy Puskas What a gentle, patient , loving soul Hugo is. He starts life in Cheshire with Maisie the wire, she could not have a nicer companion than this wonderful little boy. We have never had such a patient, gentle and kind puppy.

Leiborschy Zsaru. A long patient wait results in Starsky starting life in Milton Keynes. Could a puppy have ever have been more planned for ?, we doubt it. Starsky exactly fits his new owners requirements and will continue to do so as they begin their journey into the wonderful world of dog companionship.

Leiborschy Kinga. A seat of your pants puppy, Pearl The Whirl begins life in Hampshire with Minnie the wire. An extraordinary girl, Pearl brings along challenges and triumphs as she trains for the Field. Whatever she brings it will be at 100mph................be careful what you wish for................you may get it! Pearl began competing at Working Tests at 7 months and competed at her first Field Trial in December 2010. Peal was graded Excellent at the HWVA Grouse Pointing Test March 2011and was awarded a Certificate of Merit at The Brittany Club Novice Field Trial November 2011 gaining an entry into the KC Stud Book and qualifying her for Crufts for life.Pearl was Runner Up in 2008/09 for the HWVA Kellyhill Quaich Working Test Award. In 2011/2012 Pearl was awarded the HWVA Gonegos Trophy for Spring Pointing/Grouse pointing points and The Greenwire Field Trial Trophy for highest FT points.

"the wind was even more changeable for this bitch, but her handler quietly left the bitch to work her ground without interference before asking her to work down the bank to her left. Almost immediatley the bitch came on solid point, when asked to produce the bird ( a hen) both dog and handler moved quietly foward and did so with the dog sitting promptly to flush. The bitch was worked on, but came back very firmly onto a point............when pushed on she produced the cock birs and again sat to flush. This bitch was very workmanlike, with a good head carriage which enabled her to take scent of the grouse over a good distance. A good partnership and a pleasure to judge. GRADED Excellent"

"The afternoons work was quartering in an area of ground with a "stop whistle" at the end of the run. Again the teamwork between handlers and their dogs was nice to observe with one brilliant performance from Leiborschy Kinga, a real "adult" effort from a youngster"

Leiborschy Eris. Eris....Goddess of Chaos, Laughter and Disorganization begins life in Hampshire with her half sister Leiborschy Suwon , Lidi. A carefully thought out and long waited for puppy Eris will enter the show ring and be worked on three shoots. We hope that Eris will bring all that her owners hope for and firmly establish them in the breed for the future. Eris is hip scored.

"Well muscled throughout, good angulation in front and behind, good length of skull to muzzle ratio, moved well on neat feet. Would prefer slightly more furnishings on head."

"Leiborschy Eris, this bitch met a young dog puppy who was a little raw. She floated around the ring, lovely head & expression, well built behind"

" this truly is a cracking bitch who stood out in this class, she is so beautifully made with everything in the right place from her expressive head to the tip of her tail, she is a delight to handle, super in outline & to add to it all she moved so very soundly, I could happily have taken her home"

"What a promising young lady, she absolutely oozes quality. Funnily enough I see she is out of the same bitch as my Best of Breed, obviously a good producer. Beautifully balanced head with melting expression, well muscled flowing neck into firm topline, absolutely sound as a pound with well laid shoulders and complimentary hind angulation. Straight front with good legs and feet straight when viewed from behind. True coming and going with freedom and drive going round. Her coat is harsh, just needs to develop.

Leiborschy Izsak. Zak starts life in Nottingham with two very excited but nevertheless sensible owners. He is the result of much research and thought and we are sure Zak will show his owners what a lovely breed this is. Zak will be trained for work and competed at his first Working Test aged 9 months. He will regularly meet up with his sister Angelika. Zaks was unable to continue with his wonderful in Nottingham and in April 2011 filled the gap left by the parting of Leiborschy Dageau by going to live with Ted's family in Lytham. Fate is a strange thing and as if was written into a script,Zak need a home at exactly the time Ted's family needed the joy of a Wire again. We all went with the flow and the result was the most marvellous outcome for all.

Leiborschy Iorys. Louis begins life in Northants , close to Starsky and Ike. We are sure that well mannered Louis is going to bring a whole new dimension to his owners world as they enjoy the companionship of a dog and the exciting world of HPR training. We hope the cats show tolerance and understanding.