This wonderful litter of six restored my faith in breeding, gave me the most wonderful eight weeks and were reared superbly by the most fantastic Mum, Choni. 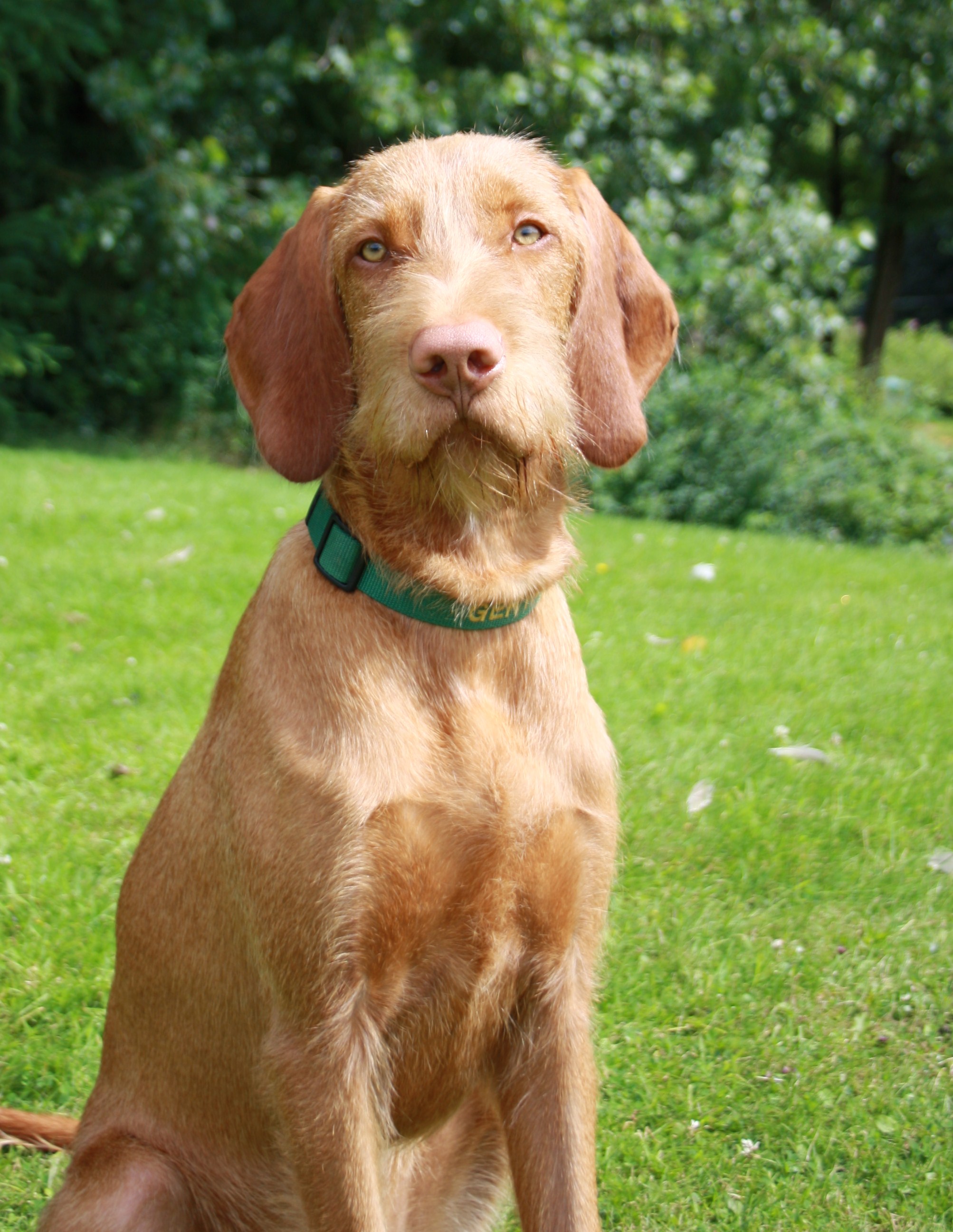 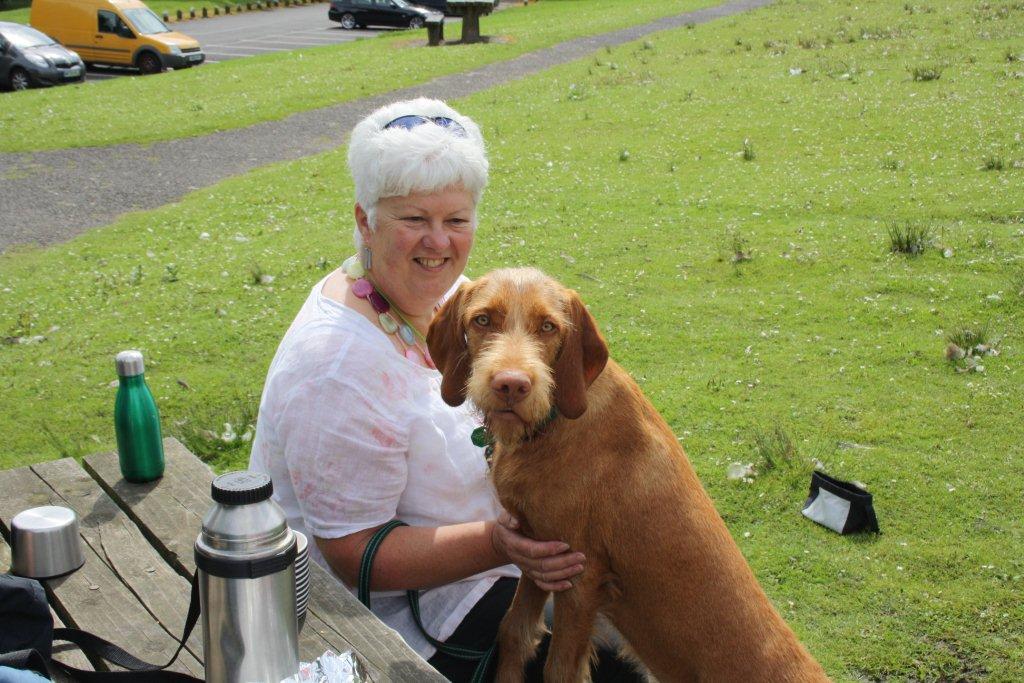 Leiborschy Golden Guinea. Gertie begins the next stage of her life in Ormskirk with Helen and Anton and we hope she will continue the wonderful Wire journey that Bella began. A pretty girl with a super rich coat colour and oodles of confidence we know that she will bring her owners fun and joy mixed with a little cheekiness. 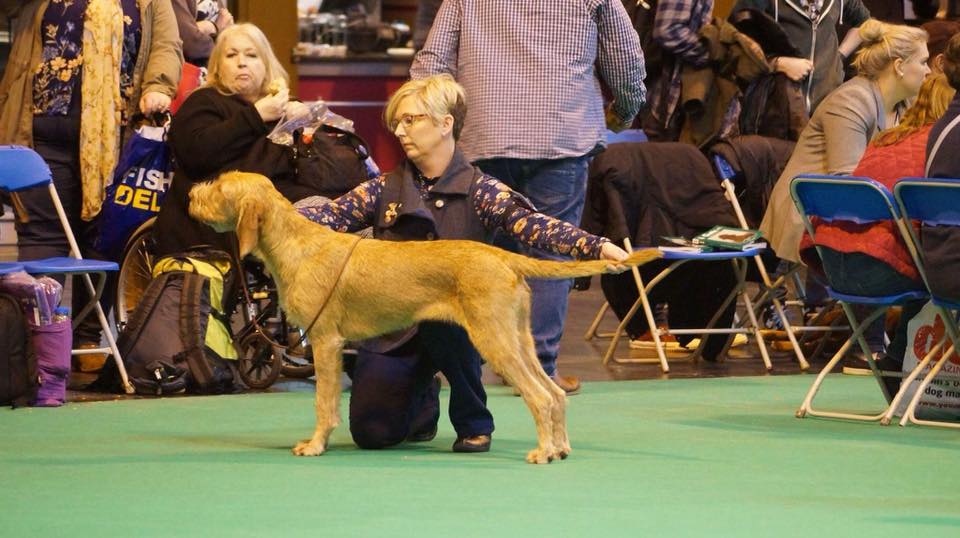 Leiborschy Bronze Ha'penny. Eevi has two Hungarian Vizslas as house mates in West Yorkshire and will introduce a new hobby, showing, to Julie and Mick. Many times I had to stop visitors from "stealing" this eye catching young lady, she simply captured everyone's heart. Outgoing and very pretty we look forward to watching Eevi grow and develop into a beautiful young lady.

" Greaves Leiborschy Bronze Ha'penny, Most lovely feminine head, eye and expression, not as mature yet as 1, clean through neck and all in moderation"

"Greave’s Leiborschy Bronze Ha’penny, actually prefer this bitch but 1 was more composed. Pretty head & eye, feminine with good furnishings. Much the same as one for construction just a real baby with time on her side. Paler coat but harsh. Good bone for her size, well ribbed back holding her topline on the move. Moved well" 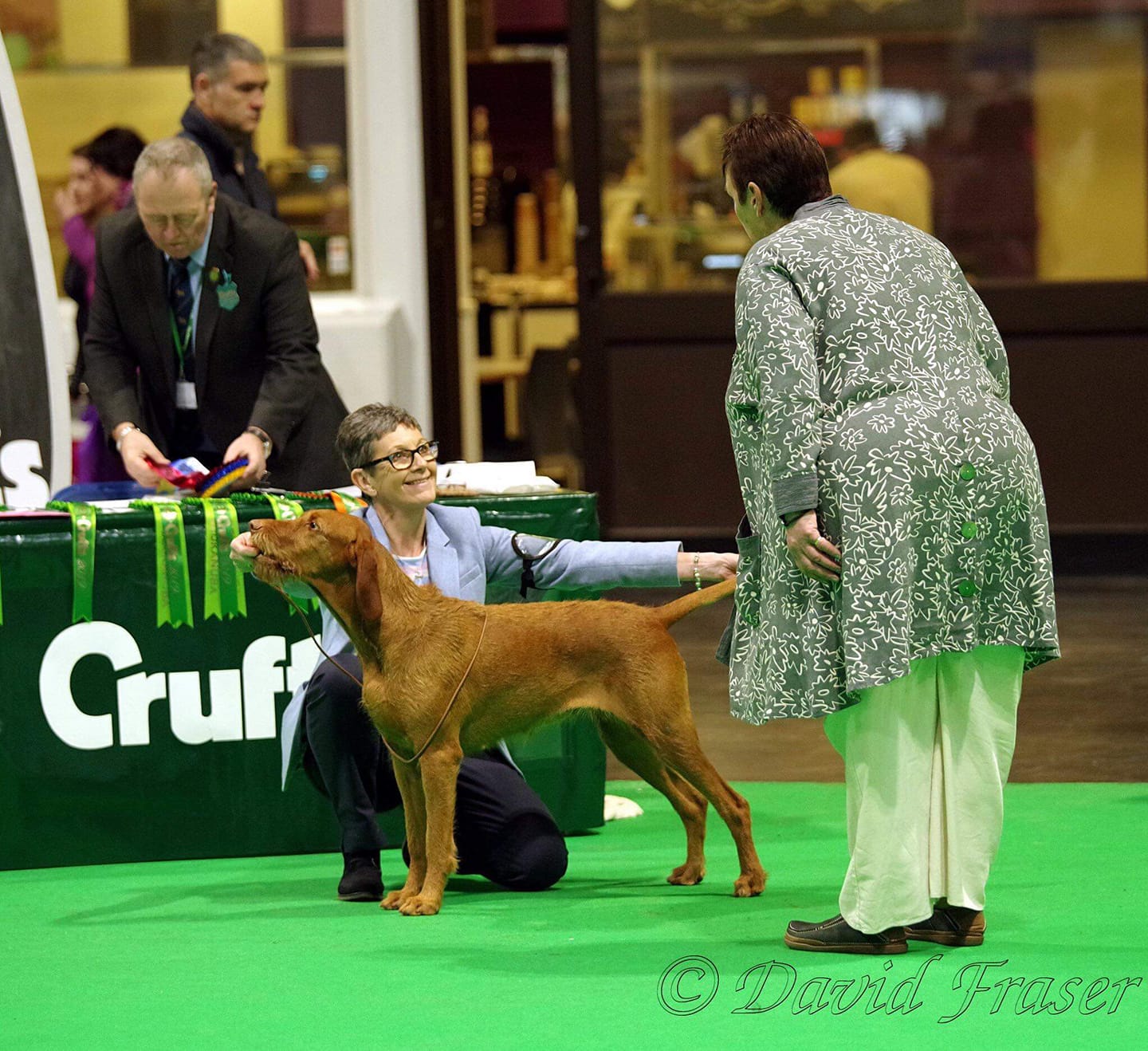 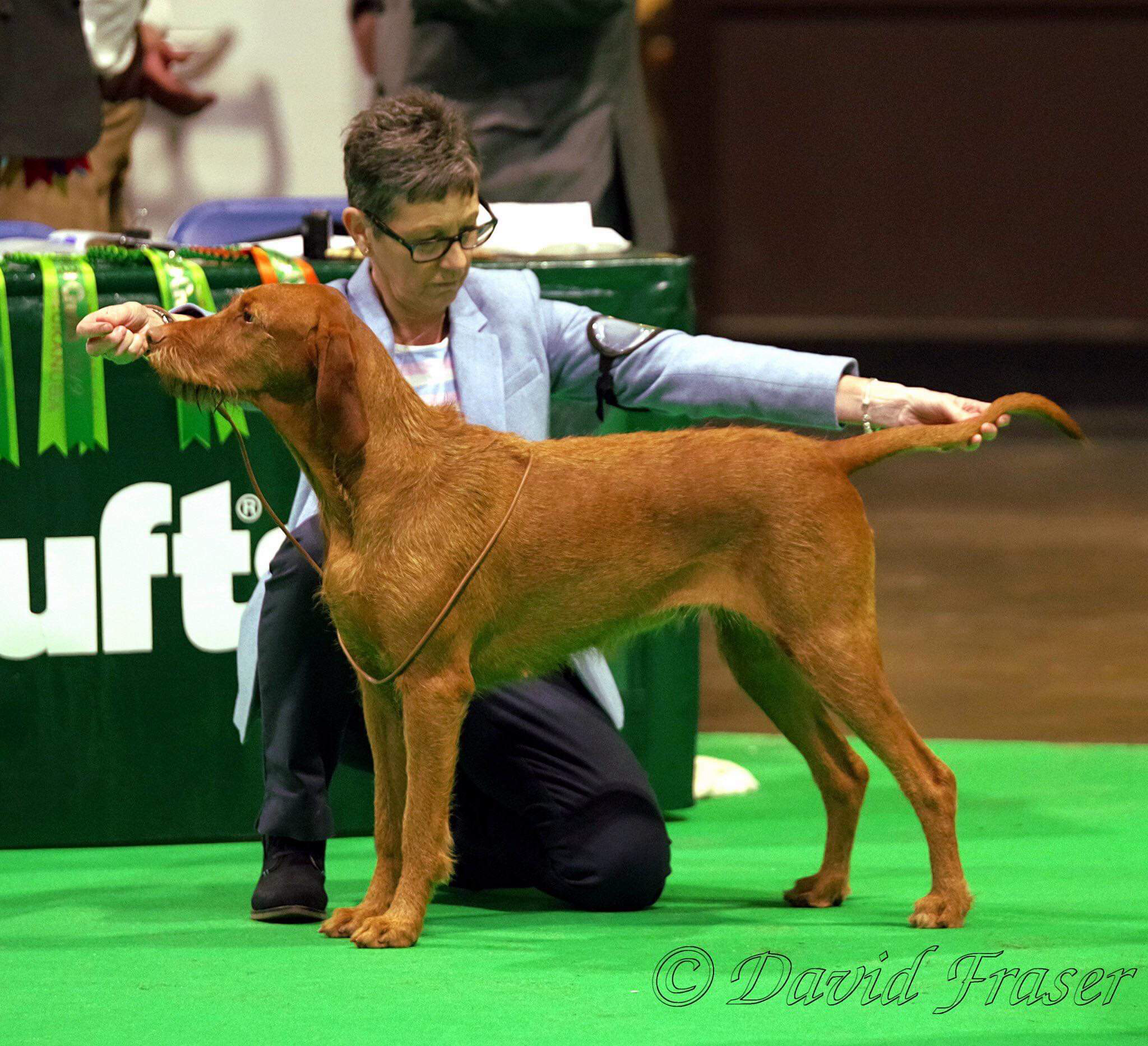 Leiborschy Give A Tuppence With Swnydwr.  This gorgeous young lady will take her owners in a totally different breed direction when, after 3 decades of Dobes and a short time out of the ring, Sue will make a return with Frieda. Whirlwind, hurricane, 100 miles per hour can all be used about Frieda and as the "naughtiest" puppy in the litter, she stole Diane's heart. Frieda has the eyes of many Dobe people on her and we are sure she will bring Sue fun and good times. Freida qualified for Crufts at her first show, taking Best Puppy in Breed. Frieda has been awarded the Bronze and Silver Kennel Club Good Citizens award. Frieda was awarded Best in Show at the 2017 HWVA Open Show.

"Quigley, Day & Piper Leiborschy Give A Tuppence With Swnydwr. Just 3 years, lovely head with dark eye, good shape to skull, moderate stop and broad nose, strong neck to good front angulation, good width of chest, body mature and well developed, harsh coat, clean outline, strong hindquarters, a bit proud of her tail on the move and not as positive on the move as one."

Quigley, Day & Piper’s Leiborschy Give A Tuppence with Swnyder, slightly larger bitch but good body proportions & she moved so well to win her place here, lovely head & expression, good neck & shoulders, enough coat of the correct texture, in excellent condition, she is balanced with the correct bone & feet;

.This is what I was looking for. Just 22 months old, this top-sized, deep-russet bitch immediately caught my eye when she entered the ring with a structure and body-proportions that were peerless. Shown in hard condition, with excellent muscle-tone she simply exudes strength from every angle whilst remaining obviously feminine. She had the best front assembly on display at the show, with a superb forechest decent length of upper arm and powerful, well-layed shoulder plus a great neck leading smoothly into a totally level topline with the correct moderate croup and tail-set. She also had the deepest chest of the day, reaching below the elbow, with ribs well-sprung and carried well-back into an elegant, moderate tuck-up married to a really powerful loin. Her rear assembly is equally good, with fabulous width of thigh and superb bend of stifle, not over-done or over-extended, but allowing her full freedom of rear extension. All of this structural strength showed through when on the move, where she had excellent reach and drive with an unfussy, elegant and precise gait. Though at this age, her coat is still developing, she has good body coverage and a harsh coat texture. I hope she will also develop further facial furnishings to soften and complete the picture as she continues to mature. I was delighted to award her BB and BIS.

"Quigley, Day & Piper’s Leiborschy Give A Tuppence with Swnydwr, liked her very much. Has a lengthy & feminine head, could have a bit more strength of muzzle. Very moderate in neck. Chest to her elbow. Well ribbed. Moderate rear. Moved well. Tight coat;"

"Quigley, Day & Piper’s Leiborschy Give A Tuppence, a nicely made but quite already substantial puppy. Coat coming & of a rich russet colour. Excelled in lay of shoulder & upper arm. Correct topline & tailset, held on the move. Movement was quite loose but plenty of time for her to tighten up"

"Quigley’s Leiborschy Give A Tuppence, bigger made all through, but not unfeminine. Excellent front, exhibiting forechest which was lacking in so many, depth to chest & neat at elbow. Well proportioned head, good eye colour. Coat when it comes will complete a nice bitch" 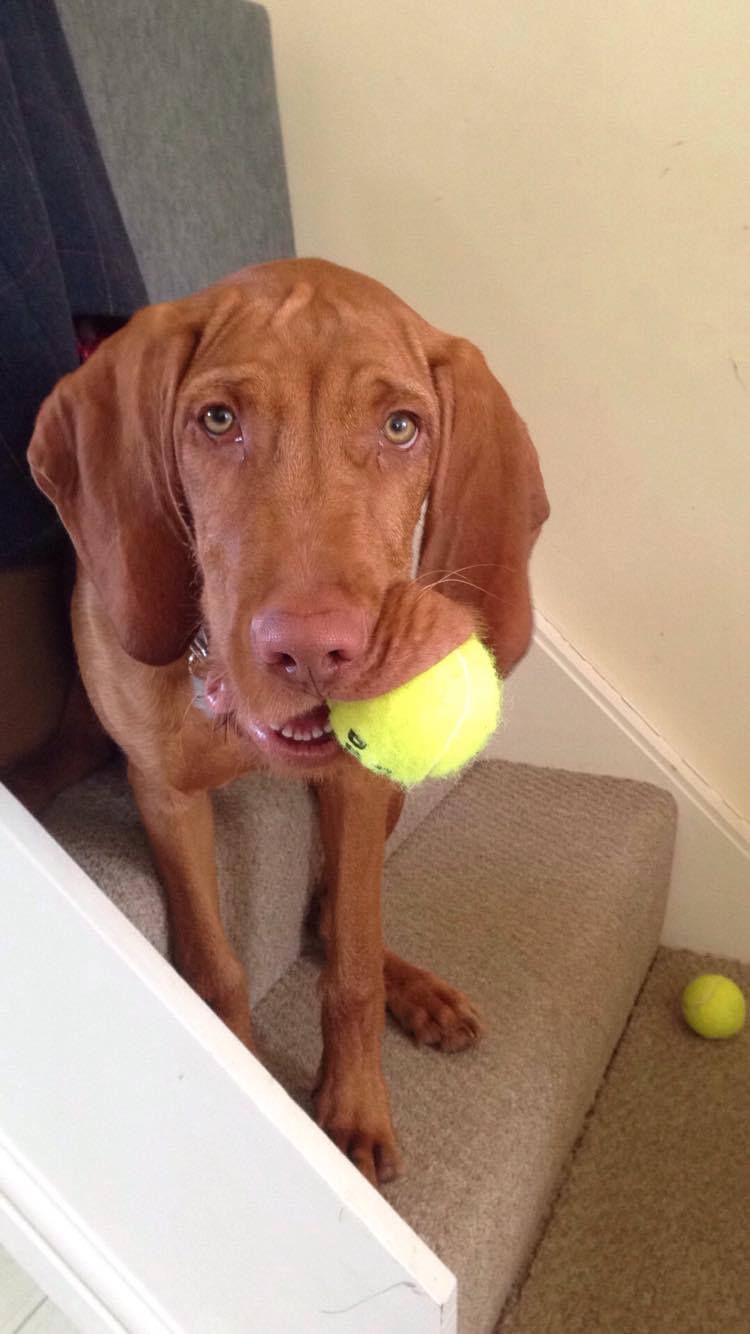 Leiborschy A Full Shilling. Shilling or Mr Shilling as he is more formally known, begins life Nr Hertford with Lisa, Ray and Ethan and the regulars at The Greyhound in Bengeo will have the privilege of Shilling's company as canine landlord. Handsome and a typical example of the breed in looks and temperament we look forward to watching Lisa train him. A gorgeous head turner we know he will live up to our expectations. Ned qualified for Crufts at his first show. 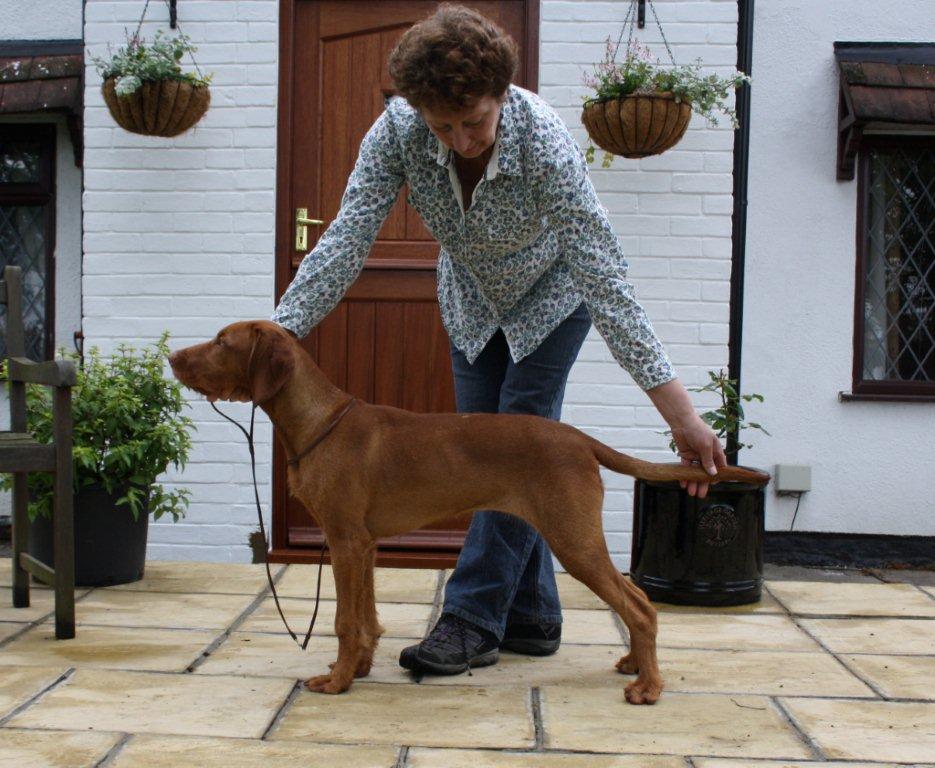 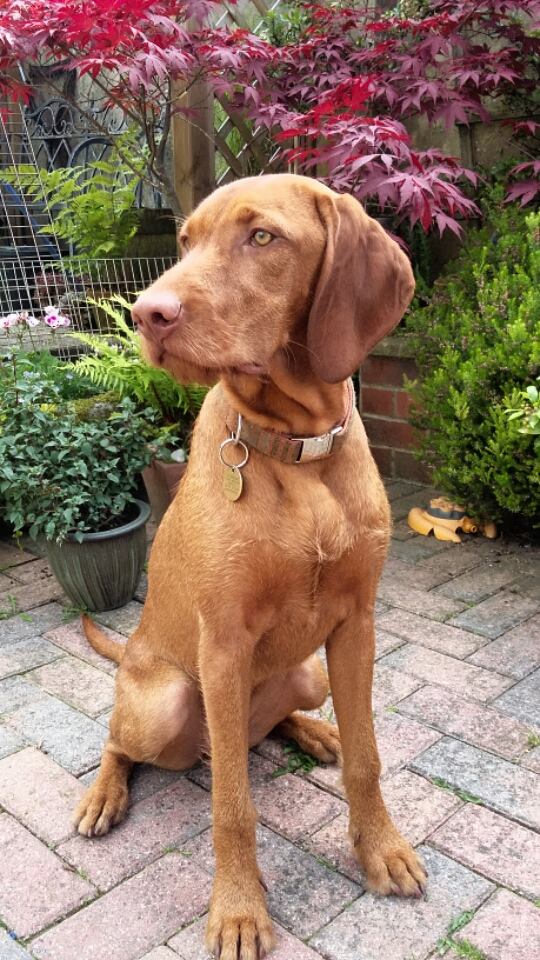 Leiborschy Silver Farthing for Riannor. Reba begins life with a very experienced Wire owners in Otley and instantly took charge of the three other adult Wires in the household but may find the very elderly Norfolk not such a pushover. There is no doubt whatsoever that fate took a full hand in ensuring that Reba went to live with Susan, Bob and Thomas...............just sometimes you have to let things happen, not intervene and the outcome will be perfect. Reba will join her sisters and brother in the showring and our hope is that she brings Susan fun, good times and takes Riannor a stride forward.Reba qualified for Crufts at her first show.Reba has passed the Bronze, Silver and Gold  Kennel Club Good Citizens Award Scheme.

"Lawson and Wrights Leiborschy Silver Farthing for Riannor, lots to like about this 7 months youngster who was giving her handler a hard time, she has a feminine head with gentle eye and expression, but lacking in facial furnishings, Good overall proportions and outline, would prefer tighter feet. Just a little erratic on the move." 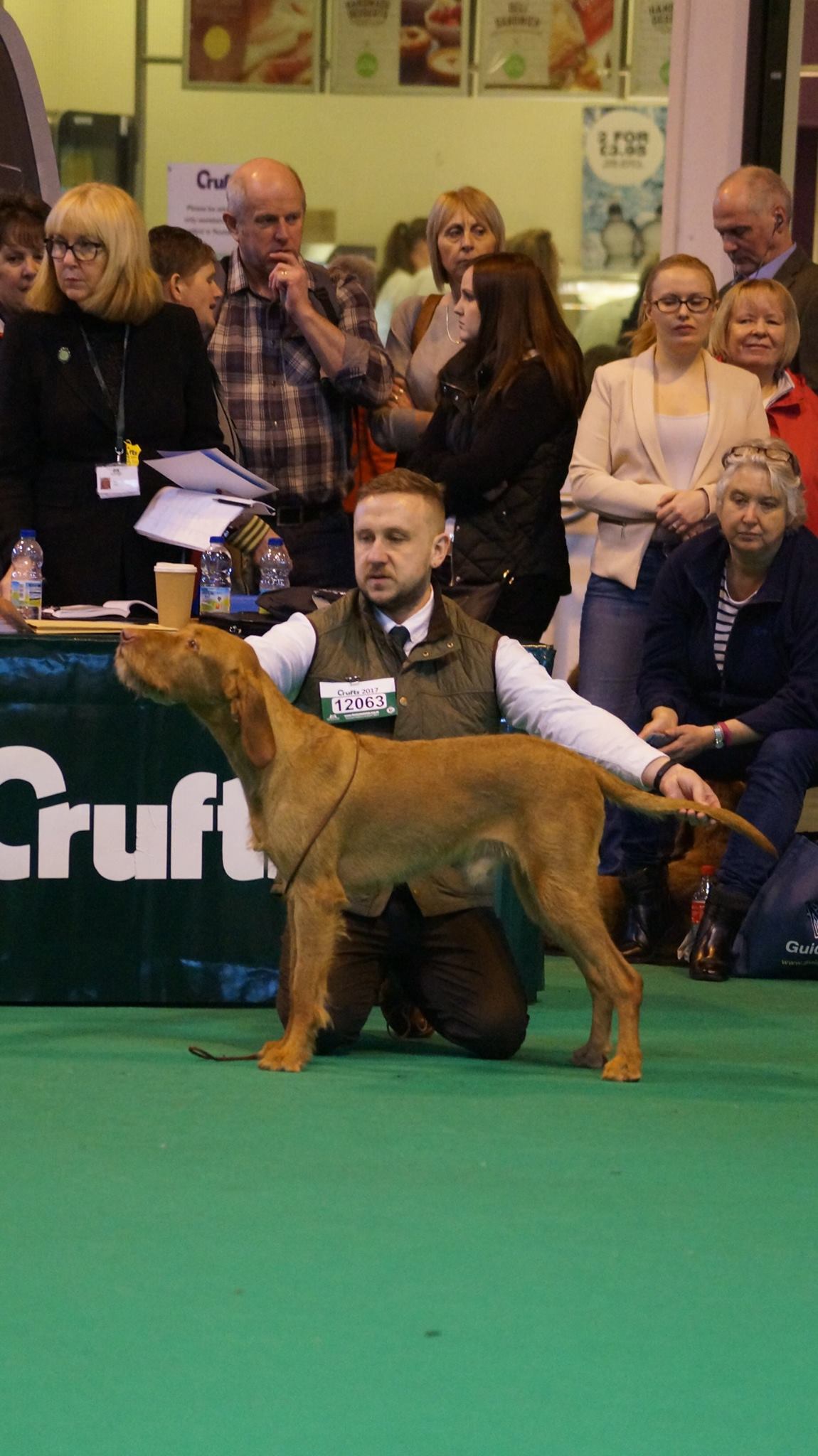 Leiborschy Gold Sovereign. Ned joins a wonderful family in Dudley comprising of twins Noah and Iris and Dave and Sue. After 9 years out of showing Dave is enthusiastic, as we are, about restarting his hobby and having some super days out with Ned and family. Rock Steady Neddy is super handsome, Mr Cool, kind and calm : typical for the breed. Part named in homage to his Great, Great, Great, Great Grandad, Gavic Gold Bullion of Leiborschy ( Henry), we hope Ned brings his family as much joy and success as Henry brought us. Ned has qualified for Crufts 2017 and was awarded Reserve Best Dog from Puppy at Blackpool Championship Show

"Hayes’ Leiborschy Gold Sovereign, an immature baby presenting a good outline. Eye colour good for age, well assembled front & shoulder as you would expect from his breeding. Straight front, well angulated rear with a coat of rich colour & good texture. Just needs to mature & tighten up on the move."

"1 Hayes’ Leiborschy Gold Sovereign, lots to like about this baby boy. Lovely head, expression & nice eye. Good neck into well laid shoulders. Nice depth of chest & well ribbed. Good bend of stifle & well boned with neat feet & a good harsh jacket. In the leggy stage at the moment which effected his movement a little. Looking forward to seeing him grow. "

"Hayes’ Leiborschy Gold Sovereign, at 6 months a real raw baby! Decent bone throughout with good quarters, but feet could be better. Stronger in head & the eyes need to darken, expression difficult to assess as he was panting hard, one that really struggled with the heat. Colour was good & a wiry coat was coming along "