Leiborschy Hekta. A very top heavy girl litter resulted in a change of plans for the Marvellous Madison's owners after a very long wait. This beautiful little lady starts live in Nuneaton and is already bringing them lots of smiles as she shows off her talents as an office assistant, gardener and chorister. Madison will dip her paw in the show ring occasionally but her most important job is as a wonderful companion. 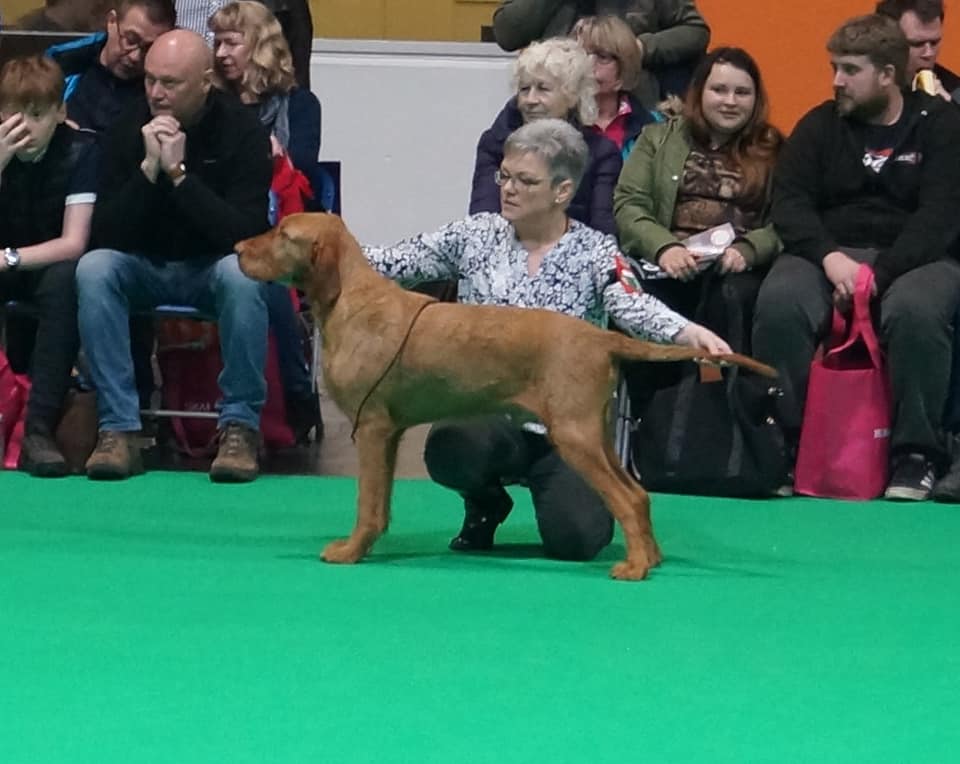 Leiborschy Lincoln. Lincoln fulfils a long held desire of his owner to welcome a Wire into her family of two Vizslak, two boys and Rob. Extensive research, planning and patience has resulted in Lincoln starting life in Derbyshire. What a laid back, easy going boy Lincoln is and he will accompany Tally, one of his HV housemates, to shows to learn the ropes and no doubt will bring Sarah lots of fun. Lincoln is hip scored. and HUU tested. As a testament to his fantastic temperament and attitude to life in June 2013 Lincoln took and passed the Pets as Therapy assessment and in July became an official PAT dog. He passed his Kennel Club Bronze Good Citizens Award at Leeds Ch Show in July 2014.Lincoln is HUU tested and hip scored. Lincoln retired from the show ring at Crufts 2019.

Lincoln was awarded the Dog Challenge Certificate under breed specialist C Guest ( Bardantop) at National Gundog Association in August 2014 from an entry of 78.He sired his first litter in September 2014 from which we kept Leiborschy Jante A Legacy.

."1 Stephenson’s Leiborschy Lincoln Of Fryerfold, he has a good outline with a very good head. OK neck pasterns could be firmer. Well ribbed back. Loses his topline moving. Very moderate hind angulation. "

"Stephenson’s Leiborschy Lincoln Of Fryerfold. I liked this one very much and on the stack I thought he would be my winner but his front movement didn’t match that of the winner’s today. He has a superb forehand with depth and strength in body, strong loin and well muscled quarters."

"pleasing head & in body, this dog is well proportioned with good forehead, his top line is level & his under line is good too, moderate coupling & turn of stifle, he moved out do well. My BD & BOB"

"1 Stephenson’s Leiborschy Lincoln Of Fryerfold, headed a mixed class which made for some difficult decisions. This dog is well made with a good head, masculine but not coarse, correct eye & ear. Good neck, shoulder & upper arm. Strong topline, well sprung ribs, & a well set on tail used actively! His is the most excellent condition & is clearly afforded plenty of exercise. A sound economical action, & happy confident demeanour, clinched him the win here. Nicely handled"

"very similar to the winner in type, lovely head with a great expression, lovely neck into clean shoulders, well boned legs, very good depth of ribs, well angulated behind, lovely textured coat, moved well but not so clean in front"

"Leiborschy Lincoln of Fryerfold, similar type to my winner, good head and angulation. Not quite the top line of my winner, but he has good coat, nice type."

. "Stephenson's L Lincoln of F, 3 year old boy of great substance. Absolutely cracking, very masculine & correctly proportioned head, slightly square with moderate stop & the most wonderful, warm expression with no hint of coarseness.  Superb & full-body covering, close lying, harsh double wire coat,, mid-russet in colour - exactly as the breed requires but all too rarely displays. Really super spring of rib and excellent depth of chest too, although would prefer more length of body. He has an impressive forechest, the correct slightly sloping pasterns, a good length of upper arm & equally good bend of stifle. Unfortunately the ring did him no favours at all & he was rather wayward on the move as a result, but his maturity secured him BOB."

"PGD 1. Stephenson's Leiborschy Lincoln of Fryerfold, a mature male that I wouldn't want any bigger. Very masculine in outlook, but not coarse in any way. Frame strong & robust throughout, excelled in forechest which was sadly lacking in some. Firm topline & firm over loins to correctly set on tail. Good width across the buttocks and to thighs. All held up on good feet & covered by a correct, harsh, wirey coat. Expressive dark eye, correct 'square' head which again exhibited strength & dignity with no sign of coarseness, desired amount of furnishings. A very typy, balanced W/h who fills your eye easily & just coming into his prime. Not as sound as the bitch in the challenge, CC"

1 Stephenson’s Leiborschy Lincoln of Fryerfold, masculine dog, liked his size & bone the best. Would like a little less length of muzzle. Correct length neck. Well angulated front & rear. In very good coat. Well ribbed. Out & back movement could be tidier"

"Stephenson’s Leiborschy Lincoln of Fryerfold. Impressive type who was put down in excellent coat and condition. Lovely muscle tone throughout and was definitely ‘fit for function’. Pleasing head and expression, well developed body, moved freely, just preferred the more balanced outlook of the winner."

The National May 2012 Judge P Harper

Leiborschy Scout. Scout begins life in Hertfordshire with two very responsible children and two VERY excited adults. Herbie the Weimaraner will show Scout the ropes and she will bring Herbie the canine companionship he has missed. A busy, cheeky little madam with the sweetest disposition, named after a character in a novel I are sure Scout will develop into quite a character.

Leiborschy Yazsarek. Zak begins life in South Devon with Tia the Wire, after almost a years wait he is exactly what his owners ordered. A super, kind, uncomplicated chap Zak is very lovable and will enhance Tia's and his owners lives life after a period of sadness. Its impossible not to smile when you see Zak .......a charming, delightful boy.Zak and his owner Gill gained The Kennel Club Gold Good Citizens Award in August 2013.Zak is HUU tested.

Leiborschy Lettie. Lettie begins life in Essex with Leiborschy Elka and what a pair of pretty girls they will make. Lettie is blessed with the most stunning looks and an easy going personality ( although she does love to sing!!). Make sure you have plenty of time for walks Dave and Lyn as I'm sure you will be stopped time and time again with such a beautiful brace. 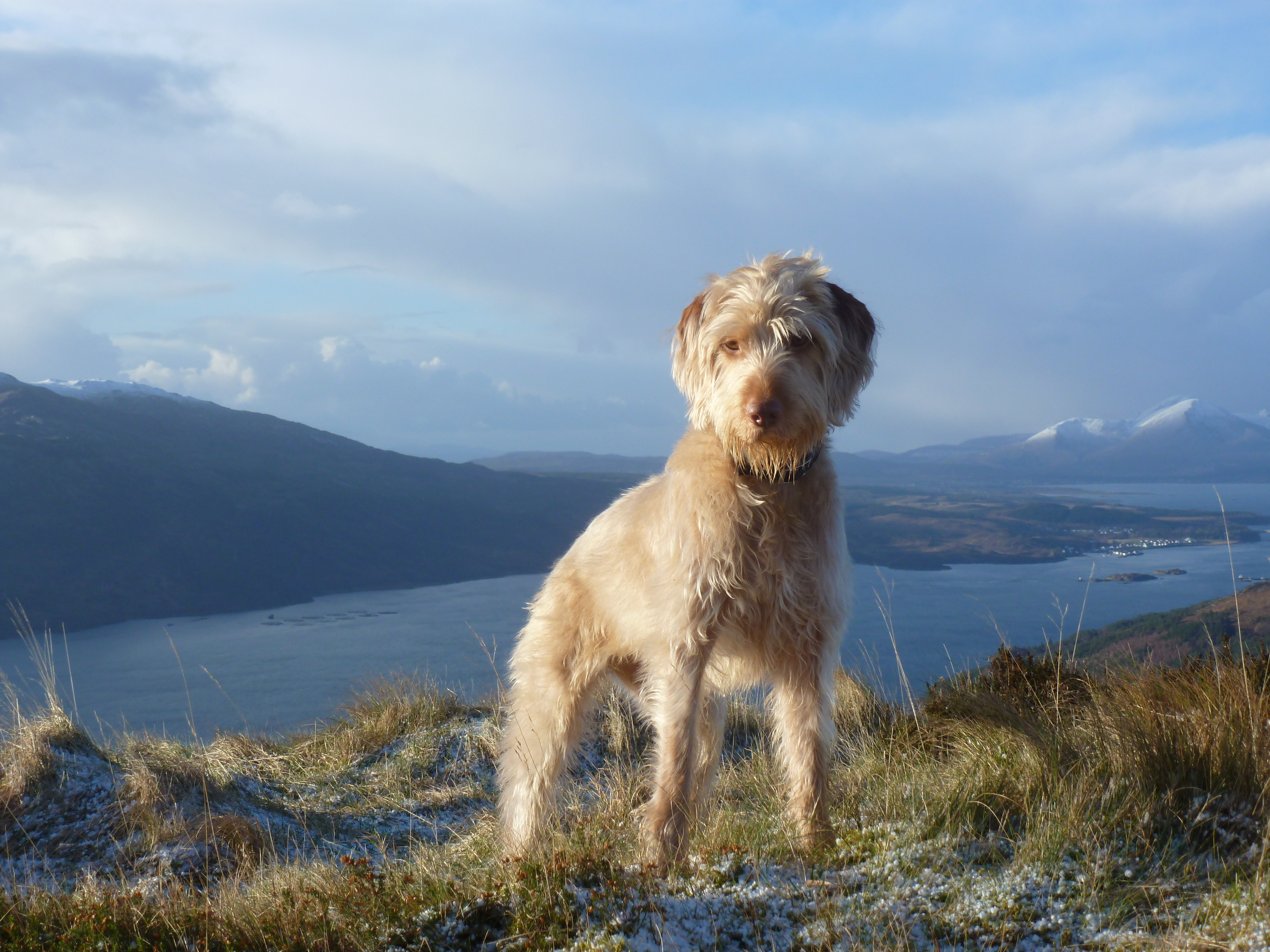 Leiborschy Kara. Lots of week ends in S Yorkshire and Lincolnshire result in Val and Robbie finally taking the beautiful Bella made the long journey to Kyle and is settling in well. She will be a regular at the village Post Office and will have a large fan base in no time as well as keep Robbie company as they walk in the hills.

Leiborschy Indiyanah. Indi begins life Nr Preston with Nichola and Ian and the temptation of this fizzy, sparky girl proved too much and they fell in love with her ( they are not the only ones!!). A chip off the old Great Aunt Lajka block I forsee lots of challenges but ample rewards from this full of fun puppy. 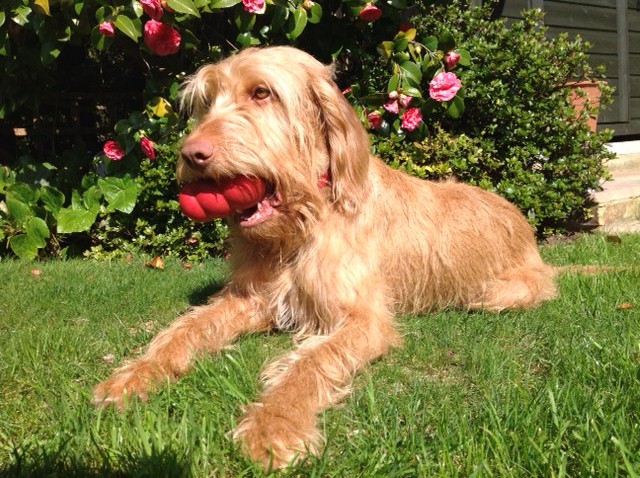 Leiborschy Ilva. Fate certainly had a hand in bringing Dilys and Deborah together as they start life in Maidstone. Dilys stayed here a little longer than her littermates and my goodness didn't her personality shine through in those extra few weeks. The sweetest, most placid, enchanting puppy Dilys will be the perfect companion for her owner, a match made in heaven. 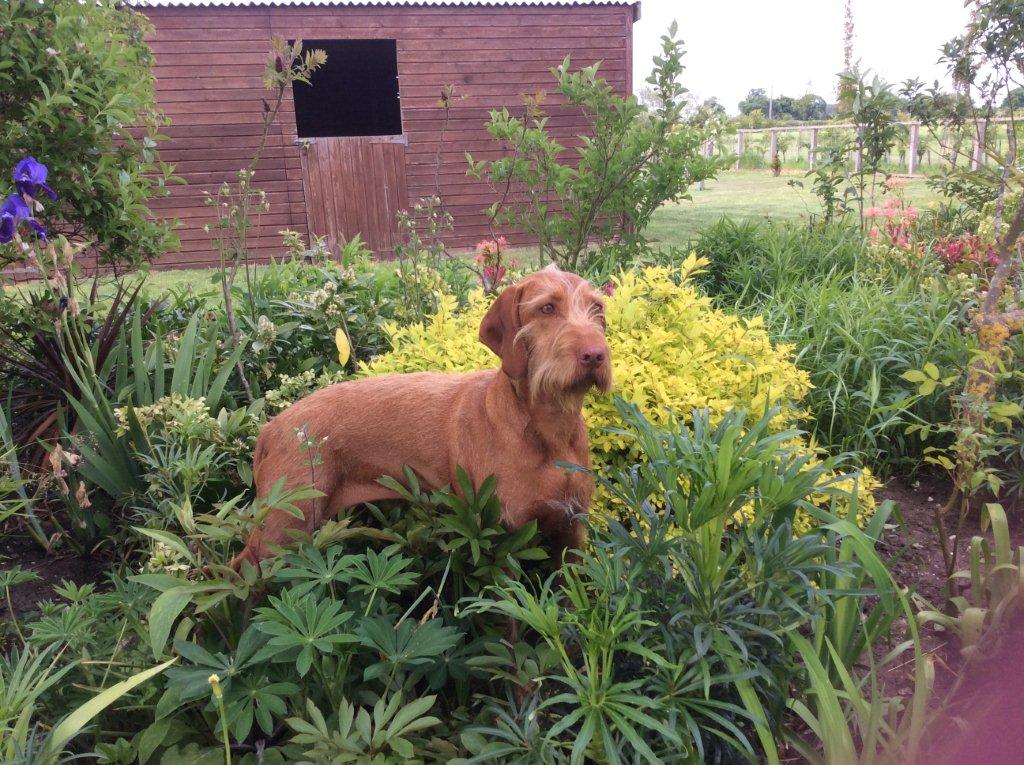 Leiborschy Brona. Hard as it was to let this beautiful lady go, Ruby starts life near Fakenham with Roger and Jane. An utter delight, impish and full of beans is how her smitten owners describe Ruby as she arrives in perfect timing for all of them. 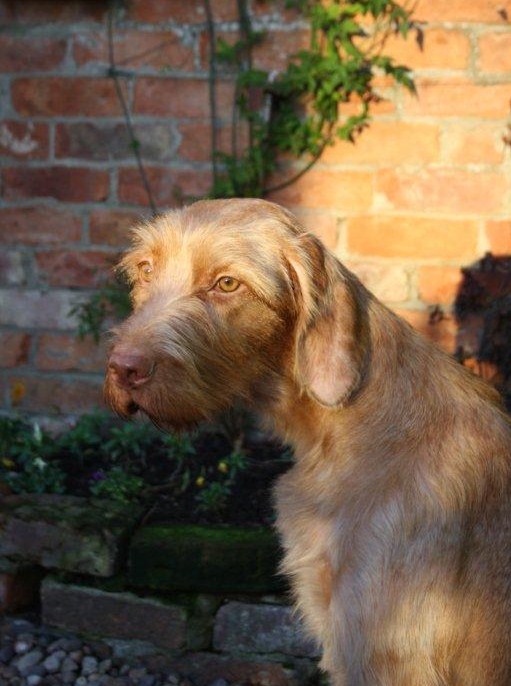 Leiborschy Rena stays here with me, meet her here